Minister of Information and Culture, Alhaji Lai Mohammed, has said that the country needs power to regulate private broadcasting, including internet and online outlets.

Speaking on Wednesday at the House Committee public hearing on a bill to amend the National Broadcasting Act organsied by the House Committee on Information, National Orientation, Ethics and Values, he said the National Assembly should amend the existing NBC law to include internet and online media broadcast, as the Federal Government has the obligation to monitor broadcast content.

However, stakeholders in the industry including Institute for Media and Society, International Press Centre and Centre for Media Law and Advocacy argued that inclusion of internet broadcast and online media to broadcast service licences would spell doom for civic space, freedom of expression and media freedom.

On the proposal that the NBC should regulate and provide digital broadcasting in Nigeria in line with the International Telecommunication Union (ITU), agreement referred to as Regional Agreement GEO6, 2006, the Minister noted that it should be in a manner that will be cost effective for Nigeria.

He said; “With due respect, our laws cannot be subservient to international telecommunication union treaties.

It is true that we are part of the treaty, but our laws and act cannot be made subservient to any treaty. Treaties are made, but our laws will have to protect peculiar situations in our country.

“Internet broadcasting and all online media should be included in this, because we have responsibility to monitor our contents, including twitter.”

The Minister reacting to section 2 (C) of the proposed law which listed the categories of licenses to be granted listed them as, Cable Television Service, Direct Satellite Broadcast, Direct Home Service, IPTV Radio, EPG, Digital Terrestrial Television, Radio and Television Stations and others.

Opening the two day public hearing, Speaker of the House of Representatives, Femi Gbajabiamila noted that If these Bills become law, the proposals contained therein will influence creation of media content.

“They will determine the content of advertising, regulate free speech and establish institutions that will impact our country for generations to come.”

The considered Bills are; an Act to amend the National Broadcasting ACT, CAP N11 laws of the federation, 2004; A Bill for an ACT to establish, Nigeria Institute of Translators and Interpreters and for related matters (HB 136); A Bill for an ACT to repeal advertising Practitioners, Registration and others CAP A7, 2004.

The Speaker stated that the House Committee on Information, Culture, Ethics and Values, led by Olusegun Odebunmi convened this Public Hearing to allow citizens and stakeholders review and contribute to draft Bills currently under consideration in the House of Representatives.

“Public hearings, policy dialogues and other such activities are an important part of the legislative process as they allow elected representatives of the people to collaborate with the public in a joint effort, making laws for good government of the country and welfare of all our people.

“Each of the Bills under consideration seeks, significantly to alter statutory framework of media, advertising and intellectual property regulation in Nigeria.

“I say this to remind all the stakeholders, lawmakers and citizens, that you have a tremendous responsibility, to make sure that all the legislation that emerges from this process are of the highest quality, and in the best interest of the Nigerian people and do not impose liabilities on our people or create conditions that will allow for infringements on human rights of citizens.

“You have a lot of work to do, and I am confident that you will do it well to the best of your abilities,” he added. 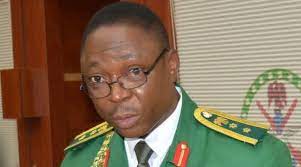